Addison Rae Easterling is an actress, social media personality, dancer, and singer from the United States. The 21 years old began aggressively publishing content on TikTok in July 2019, when her dancing videos gained popularity. The TikTok star has over 87 million followers on TikTok as of April 2022, making him the fourth most-followed person on the platform.

The influencer was crowned the highest-earning TikTok star by Forbes in August 2020. In March 2021, she released her debut single, “Obsessed,” and on August 27, 2021, then 22 years old made her acting debut in He’s All That, a gender-swapped remake of the 1999 film She’s All That, which was released by Netflix.

Addison Rae Easterling is 22 years old as of 2022, having been born on October 6, 2000. The TikTok star was raised in Lafayette, Louisiana, by Monty Lopez and Sheri Easterling. The social media star is of Spanish ancestry, according to her father. Rae’s younger brothers, Enzo and Lucas, are also known as “Rae.” Addison’s parents divorced when she was young and were divorced and remarried several times throughout her life before reuniting in 2017.

Rae began competing in dance at the age of six, travelling across the country to compete. Before relocating to Los Angeles to pursue her TikTok career, the dancer briefly attended Louisiana State University (LSU), where she studied sports broadcasting in the autumn before dropping out as her TikTok fame grew.

In July 2021, after the TikTok star terminated her on-again, off-again relationship with TikTok star Bryce Hall, Addison Rae, and Omer Fedi made waves for their prospective romance.

Rumours of a romance between her and Omer began to circulate in July 2021, when she posted a video of them kissing on Instagram Stories. Omer confirmed their relationship with an Instagram Story post a month later.

When Addison and Omer were photographed holding hands while out and about in Los Angeles in August 2021, things between them began to heat up. The red-haired artist also began sending amorous Instagram comments on the Netflix star’s images.

During their time together, Addison and Omer have been seen on many dates around Los Angeles.
Addison shared a wonderfully adorable video of Omer hugging her from behind on Instagram on November 19th, 2021.

The 22 years old smiles in the video before leaning in for a kiss that isn’t caught on camera. Even though the video is only four seconds long and has no sound, it has received over ten million views.

While on the red carpet for the 2022 Grammy Awards, the duo had their PDAs on them.  Image Source: Instagram

They’ve made it official on Instagram! Omer Fedi and Addison Rae have taken their suspected relationship to the next level.

The musician used Instagram Stories to congratulate the TikTok star on the release of his film, “He’s All That” in August 2021. At the moment, “both my baby and I are No. 1,” Omer stated. I’m incredibly proud of her. I’m curious if we’re the first pair to accomplish something like this with a movie and a song. Anyway, sweetie, I adore you. “

During the same month, Addison and Omer began to open up about their relationship on social media. The musician, for his part, used Instagram Stories to share a selfie of him and Addison with the message, “She’s wearing the pants in the relationship.”

The pair have been observed out and about in L.A. on several occasions with their PDAs on. In October 2021, Omer paid Addison the loveliest 21st birthday tribute. The musician listed all of his favorite qualities about the “Obsessed” singer in a series of Instagram photos. In part, Omer added, “Btw, you’re also my favorite person to have gelato with.”

As of 2022 the online stars “are really into each other” and that they’ve “been together for four months.”

Since the official announcement of the TikToker Addison Rae dating Omer Fedi news came out, fans are now excited to know about Fedi. So who is Omer Fedi?  This question has been circulating on the internet for a while, and now we have an answer.

Omer Fedi is an Israeli guitarist, songwriter, and producer who was born in Tel Aviv on March 25, 2000. When he was a teenager, Omer traveled to Los Angeles with his father, who was one of Israel’s most successful drummers. 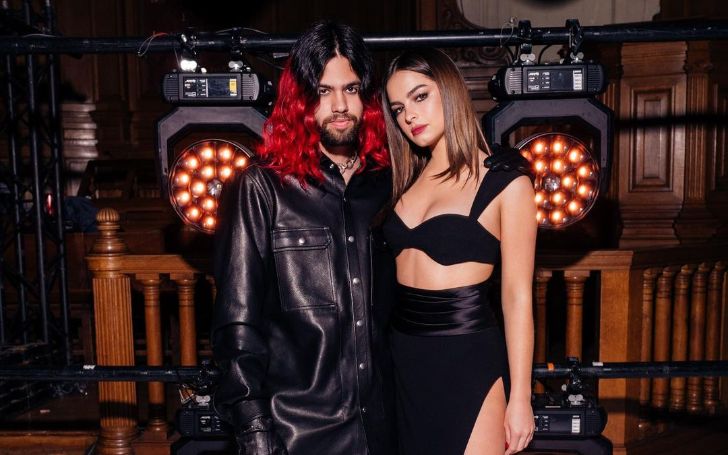 He began working with YUNGBLUD and other musicians after graduating from high school. Fedi met 24kGoldn at a party shortly after, and the two began writing together a week later.

The singer sang and produced the song “Montero (Call Me by Your Name)” by Lil Nas X, which was released on March 26, 2021.

In April 2021, he told Variety, “I’m more of a behind-the-scenes guy, and I’m not even close to attaining my [songwriting] aspirations.” Every day, my friends push me to be better, and I want to assist them in becoming the greatest artists of all time. “All I want to do is be a part of the adventure.”

Omer is not only a superb guitarist, but he also wrote some major songs, including 24kGoldn’s “Mood” and Lil Nas X’s “MONTERO (Call Me By Your Name).”

Make sure to remember BAE Mag to find more relationships, and dating articles, about your favourite stars.