Helene is one of the very few multi-talented ladies who has been blessed with singing, dancing, and acting skills. Her skills in a variety of things seem to have been specifically God-given by tailoring it for the entertainment industry. How the talent house exploited her artistry in the entertainment world is an interesting career path to look at.

Helene Ann Yorker was born on February 27, 1985 AD in Vancouver, Canada to Andrea Dyke and Rhos Dyke. She belongs to Canadian nationality and white ethnicity. Yorke is a mesmerizing personality with beautiful green eyes and blonde hair. The gorgeous actress stands at the height of 5’6″ and weighs 50 kgs. Her zodiac sign is Pisces.

Born in Vancouver, British Columbia, Yorker barely spent her childhood there as the family moved to the United States of America as soon as she turned one year old. Her father sold software, which required Yorke to move around a lot. She grew up in Los Angeles, California with short-lived jobs living in Atlanta, Georgia, and Minneapolis, Minnesota. The American actress has two siblings, Sutherland Dyke and Lance Dyke.

The child prodigy showed signs of being in the entertainment field from a pretty young age when she was interested in dancing from an early age and started doing ballet at the age of three years old, and started taking acting classes in middle school. That could be taken as a road map to the glam world.

She attended Palisades Charter High School. After schooling, she went on to the University of Michigan. The association with this university earned her Bachelor’s degree in Fine Arts.

Alike most of the big names, she also began her career in the glamour world from the theatres. Her first performance in front of the mass was the play named ‘Walmartopia’ as Hooters Girl in the year 2007. After embarking on the theatre journey, there were more to come from this talented lady in the anteceding years.

The 36-year-old has worked on various Broadway productions, including ‘Bullets Over Broadway’, ‘American Psycho’, and ‘Grease’. She is widely recognized for introducing the roles of Olive Neal in ‘Bullets Over Broadway’ and Evelyn Williams in ‘American Psycho’. She also played Glinda in Wicked on tour. ‘What’s the Smell’, ‘Kiss Me’, ‘Kate, Grand Hotel’ are some of the other plays she has performed in. 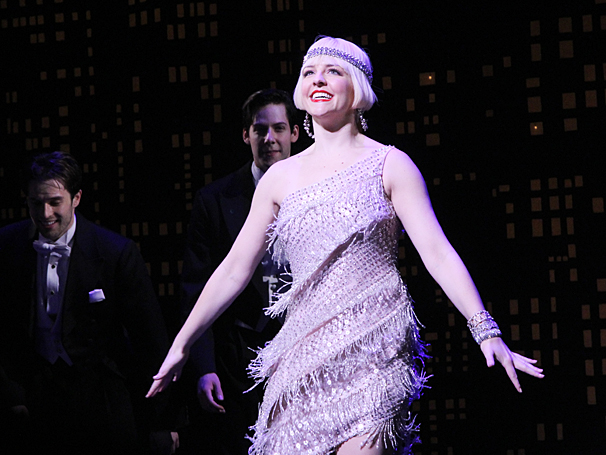 This was the start, and it spanned to movies and TV show. In 2013, the performer was cast in a recurring role as Jane Martin on ‘Masters of Sex’. She currently co-stars as Brooke Dubek on Comedy Central’s ‘The Other Two’ which was renewed for a third season in September 2021 and she is playing the role of Amanda on the CW’s ‘Katy Keene’.

Other notable performances of this artist came in the projects like ‘Louie’, ‘A Gifted Man’, ‘Robot Chicken’, ‘Graves’, ‘Are You Joking’, ‘Supermarket’.

There is a limited number of movies and series played by Yorke, but there is undoubtedly more to come from this artist in the future.

The gorgeous actress started dating Bobby Flay, an American chef in sometime in 2016 when she was just 36 years old whereas Flay was 56 years old. The couple made their relationship public when Flay divulged that they had been dating for a year during a 2017 episode of his Food Network show “Beat Bobby Flay”. He revealed that they met courtside at a New York Knicks basketball game, after which they started going out. Yorke created an Instagram account @thehungriestgirlfriend documenting their food and restaurant adventures and experiments in the kitchen with Flay after becoming the girlfriend to the Food Network chef. Her bio read ‘I’m dating a chef. I’m still hungry” underneath her profile photo.

The speculation about the couple’s break-up started after the actress posted on Instagram of her sharing an intimate kiss with a mystery man at a Michigan football game in September 2019. One month later, Flay confirmed that he indeed was “kicked to the curb” by Yorke.

As it turns out, that mystery man was  Yorke’s fiancé. She announced on Twitter on Valentine’s Day that she had said “yes” to his proposal. Yorke did a pretty good job keeping this relationship more private than others.

The brilliant performer tied the knot with her partner,  Bary Dunn on September 3, 2021 in Brooklyn, New York as she took to Instagram to share the wedding snaps.

Helene Yorker Net Worth is in Millions!

Yorke’s net worth is estimated to be between $1 million and $5 million dollars. This includes her assets, money, and income. Her primary source of income is her career as an actress and singer. Through her various sources of income, she has been able to accumulate good fortune but prefers to lead a modest lifestyle.

The box office collection of her movie ‘The Night Before’ was $52.4 million. So accounting all Helene Yorker net worth sources, the showbiz star net worth is assumed to be around $1 million to $5 million.

We hope you found answers to your queries, for more Telly World, and Silver Screen updates make sure to bookmark BAE Magazine.