Andrew Russell Garfield is an actor who has worked in both the United Kingdom and the United States. The actor has garnered numerous awards, including a Tony Award, a British Academy Television Award, and a Golden Globe Award, as well as nominations for two Academy Awards, a Laurence Olivier Award, and three British Academy Film Awards.

The actor’s dedication, hard work, and excitement have propelled him to international prominence. Soon after, the actor rose to prominence in his field in a short amount of time, influencing people via his work and gaining a great deal of popularity.

Furthermore, the actor has been acting professionally throughout his career since childhood. The actor has appeared in several TV series, films, and other platforms too, but the actor still has a long way to go.

Andrew Russell Garfield was born in Los Angeles, California, on August 20, 1983, and is 39 years old as of 2022. Lynn (née Hillman), the actor’s mother, was from Essex, England, while his father, Richard Garfield, was from California. Garfield grew up in a religious household. On his father’s side, the actor is Jewish, and he describes himself as a “Jewish artist.”

The 39-year-old had meant to study business but became interested in acting when a friend persuaded him to do theatre studies at A-level when they were one student short of being allowed to conduct the class when he was 16 years old.

Is Andrew Garfield Dating Anyone in 2022?

Andrew Garfield has made his latest relationship public. Though we’ve seen him fall in love onscreen (with Gwen Stacy from The Amazing Spider-Man and Susan Wilson from Tick, Tick, Boom!, among others), he’s kept his personal life under wraps in recent years, until coming out with model Alyssa Miller.

Miller, a Sports Illustrated swimsuit model, has been linked to Garfield since November 2021, but the actor hasn’t been on her primarily work-focused Instagram account (and the actor doesn’t have social media), so their first public appearance together was in February 2022. Despite dating high-profile celebrities such as his Spider-Man co-star Emma Stone and pop singer Rita Ora, the actor prefers to keep his romances under the radar and has spoken out about his decision.

Garfield and Miller first fueled romance speculation in November 2021 when they were seen holding hands in New York City. Garfield was seen with the model as he left a taping of The Late Show with Stephen Colbert to promote Lin-Manuel Miranda’s film Tick, Tick, Boom!

On February 13, 2022, the model and actor were seen leaving a tennis tournament in Malibu the day before Valentine’s Day. Garfield and Miller, dressed in tennis clothes and carrying a bag of racquets over their shoulder, laughed and clasped hands.

People reported in November 2021 that he was pictured with a new girlfriend on his arm, fueling the speculation. According to reports, Andrew was also spotted with Miller just before he appeared on The Late Show with Stephen Colbert.

Check Out: Who is Offgun ? Are OffGun Dating in Real Life?

Garfield and Miller attended the 28th annual Screen Actors Guild Awards together on Feb. 28, 2022, after months of under-the-radar courting. The star and his girlfriend demonstrated evident chemistry in their first formal public appearance.

As they walked out for the spectacular night, the two wore similar attire. Garfield wore an all-black ensemble with a striped blazer on top. Miller wore a black boyfriend jacket, matching pants, and a ruffled top underneath to match his ensemble.

Alyssa Elaine Miller, Andrew Garfield’s suspected girlfriend, is an American model who has worked in print and on the runway for several well-known brands. She’s also been featured in magazines, including Vogue and Elle.

Garfield’s girlfriend has also been in the Sports Illustrated Swimsuit Issue and has been a model-spokesperson for Guess. The model was born in the United States on July 4, 1989, in Los Angeles, California. Jake Gyllenhaal had already been linked to her.

A Review of Andrew Garfield’s High-Profile Dating Past

Over the years, the actor has ignited romance rumors with several girls, but he has always preferred to be open about his personal life. Here is a review of Andrew Garfield’s high-profile dating past:

From 2008 through 2011, Andrew Garfield and Shannon Woodward, an actress who has appeared in shows such as Westworld and Raising Hope, were together. I believe my partner is pleased with me and my ability to stay grounded. After the release of The Social Network in 2010, Garfield told Parade, “That’s the essential thing.” After three years together, Garfield and Woodward divorced in May 2011. As “he delved deeper into filming” The Amazing Spider-Man, where he met his next girlfriend, Emma Stone, a source told Us Weekly at the time that the two had grown apart.

After playing Peter Parker to Emma Stone’s Gwen Stacy in The Amazing Spider-Man in 2012, the Tony nominee’s most high-profile relationship began. The pair’s on-set chemistry was so great that it resulted in a real-life romance.

They met while filming The Amazing Spider-Man, in which they played Peter Parker’s love interests. (a.k.a. “Spider-Man”) and Gwen Stacy, Andrew Garfield, and Emma Stone began dating in 2011. In an interview with MTV News in 2012, Garfield recalled his “instant bond” with Stone during the filming of the movie.

When Garfield met Stone at her audition, he told Teen Vogue that he sensed there was something special about her. It was as though she jolted me awake when she walked in. It was like jumping into a raging river with no desire to cling to the side. “It was frantic and amazing the entire time we were shooting,” the actor remarked.

Emma Stone began dating Saturday Night Live director Dave McCary in 2017, two years after her separation from Garfield. They announced their engagement in December 2019 and plan to marry in 2020. In March 2021, the couple welcomed their first child together, a daughter named Louise Jean McCary.

In November 2018, Andrew Garfield and Rita Ora, a British singer known for songs including “RIP” and “Poison,” were originally linked. They were photographed holding hands in London’s Primrose Hill area on Christmas Eve. 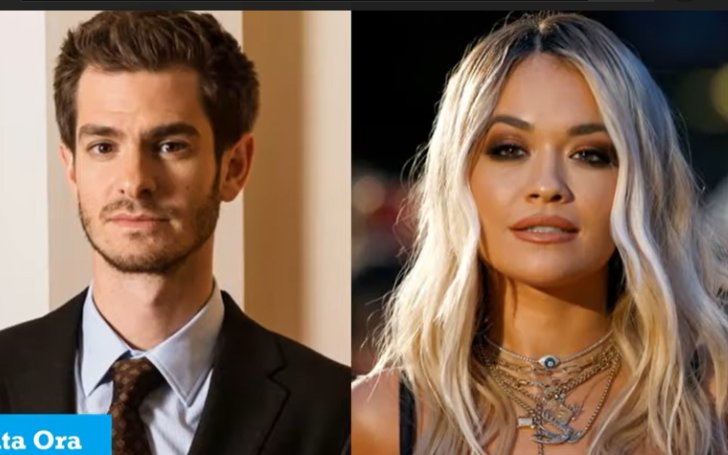 Garfield and Ora were linked in 2018 until their relationship apparently “fizzed out” in early 2019.  (Photo Source: YouTube)

After four months together, the two broke up in March 2019. “It was a short-lived relationship.” The Mirror’s source said at the time, “It’s sad, but they’ve both accepted the situation and moved on.” Garfield, according to The Sun, was the one who called it quits on the relationship.

Garfield and Ora were linked in 2018 until their relationship apparently “fizzed out” in early 2019, even though the two never formally confirmed their connection. Even though neither of them revealed their dating status, they were photographed together several times.

While many people are curious about the actor’s love life, some question if Andrew Garfield is gay. Andrew Garfield says in a new interview with Out magazine that he tries to live his life as openly as possible, even when it comes to his sexuality.

While he now identifies as a heterosexual guy, the Angels in America actor stated that he is not ruling out the idea of being attracted to men in the future.

Of course, that isn’t what the actor meant at all. The actor stated at the time that the conversation was about this play and how grateful he was to be a part of something so significant. It’s a letter of support for the LGBTQ community. There is no evidence that the actor has ever dated a male.